There has been lot’s of buzz those days around Silverlight adoption and RIA plug-in deployments.

While Adobe believe that “Silverlight has really fizzled”, Microsoft claims that Silverlight is installed on “more than 1 in 4 computers”.

Statistics are collected from 1,500,000 daily unique browsers across more than 40 sites over the past 30 days – No mention of which sites and what they talks about (newspaper? weather? games? books? sport? / US? European? / private? public? / social network? ……). 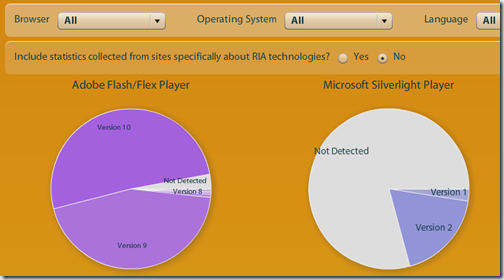 Note that you can filter by Browser, OS or Country.

According to those stats, as of March 2009, Silverlight is installed on 21% of computers connected to the internet.

What amaze me is that Flash 10 is already installed on more than 53% computers!!!! It was released on october 14, 2008 the exact same date as Silverlight 2 release. In 4 months Flash 10 has been spread on more than half computers worldwide (connected to the Net): this is huge! Of course it benefits from the actual auto update.

I have always believed that Flash plug-in is good for Silverlight, because people are used to install plug-in in their browser; thanks to Flash people actually knows *what* a plug-in is. Moreover Silverlight is a plug-in by Microsoft, and not any obscure third party company, not to mention the optional windows update which will help for sure. So I don’t worry about Silverlight, it will be on every machine sooner than later. Sweet.