I have been doing many demos of Blend SketchFlow, but never tried the process to go from sketch to real screens when prototyping is finished.
After MIX09, my first understanding was that one of the goals of SketchFlow was being able to easily switch from prototype to “real” app. But I was wrong and I found that many people are.

Maybe the confusion comes from what is written on the site:
http://www.microsoft.com/expression/products/Sketchflow_Overview.aspx

“Traditional prototypes are generally redundant after the concept phase and discarded. SketchFlow enables you to leverage all the previous conceptual work, every asset and component created is reusable in your production project – nothing goes to waste.”

I think many people (like me) incorrectly understood that we could simply switch from prototype to real screens, which is not really the case.

On the Blend documentation (Hit F1, select SketchFlow and click on “Convert a prototype”) you can find the official procedure to “convert your SketchFlow prototype into a production-ready project”. Have a look at it and you’ll see the process is long and really painful… far from a “convert to production” button that would remove the Sketch style from every control and clean the solution. 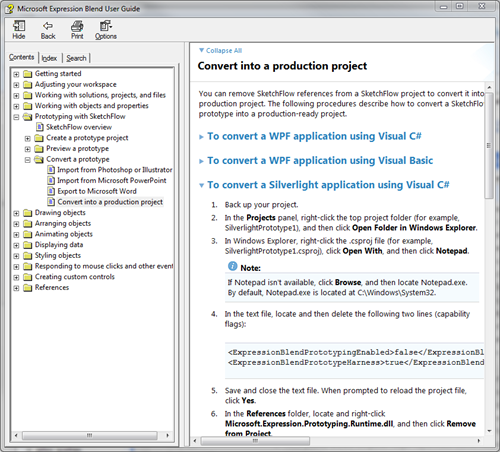 In fact the point is that you generally wouldn’t want to do that, and someone from the Blend Team confirmed this. You should build your prototype without production consideration in mind. The structure of a SketchFlow prototype itself is not done as a typical well-architected production solution would be. SketchFlow is very good to help you build mock-ups in a RAD-style development, then for production you have to start a clean new project and reuse some of the assets you created during the prototype. But no “convert project to production” button here, and no plan to have one as I heard (for the reasons described above).

Note: I am not trying to minimize the benefits of this tool, just pointing out the “switch to production” might be surprising at first.